I am in southern Germany on a farm that professionally keeps red deer.

Together with the breeder/hunter I discussed in detail the application of Low Stress Stockmanship and how it can be implemented in practice.

Those present were able to see this for themselves on this farm. 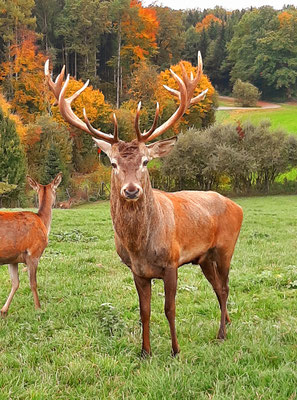 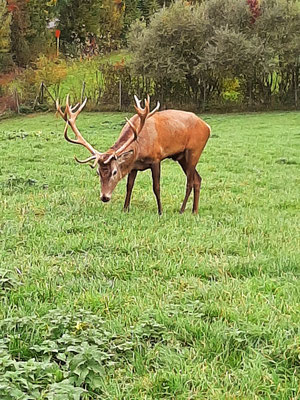 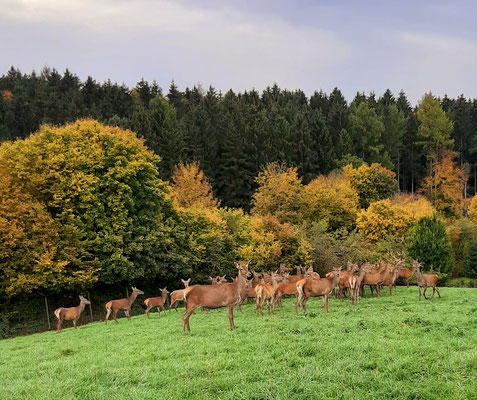 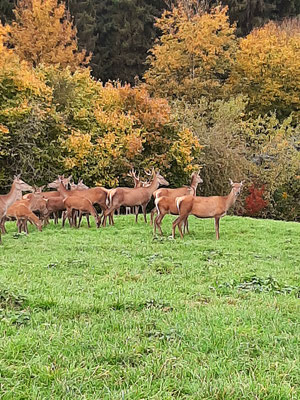 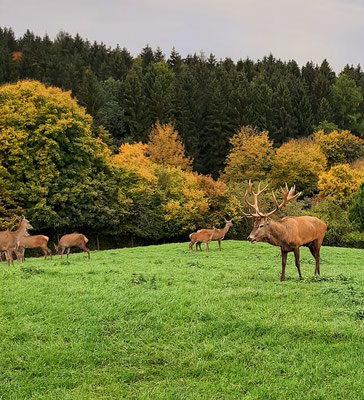 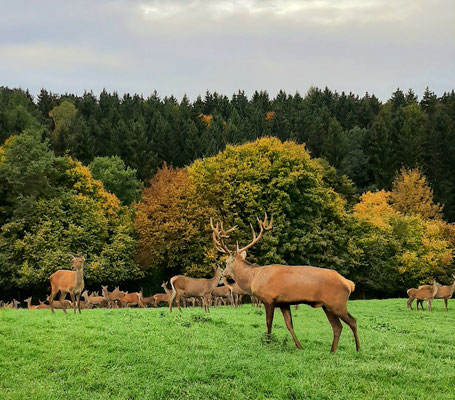 As one of the largest livestock trading organizations and meat producers in Europe, PALI Group is actively involved in the entire chain.

Because for PALI Group the quality of loading, transporting and unloading live animals is a continuous point of attention, I provided an interactive presentation exclusively for the truck drivers and their management at the PALI Group. 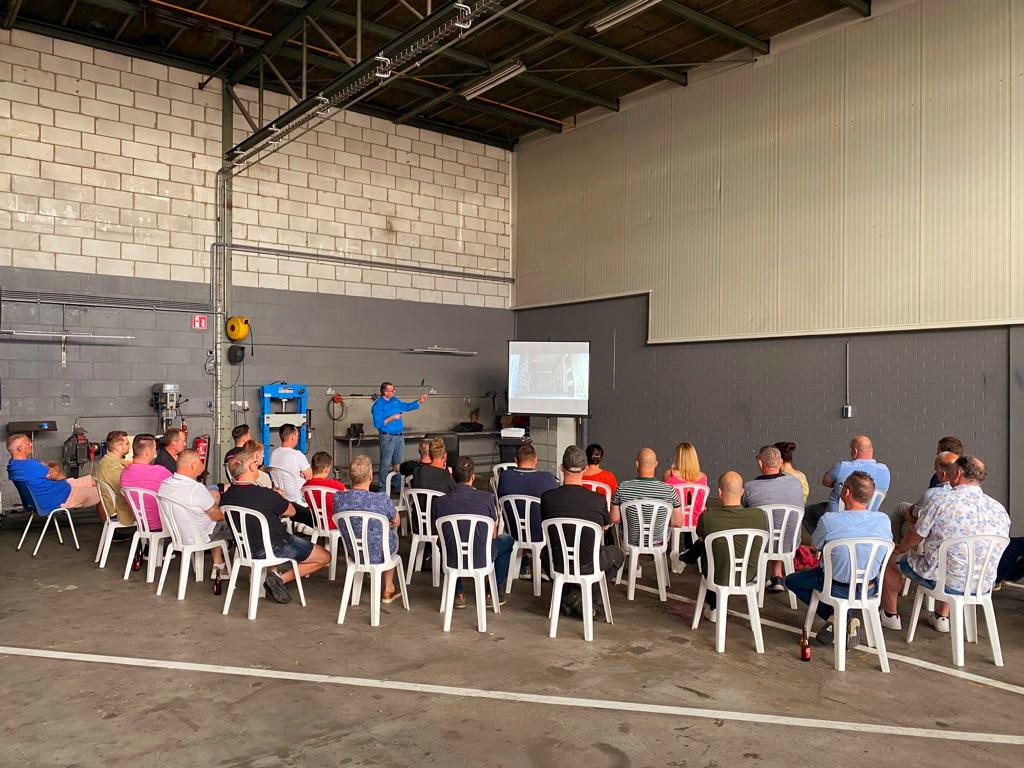 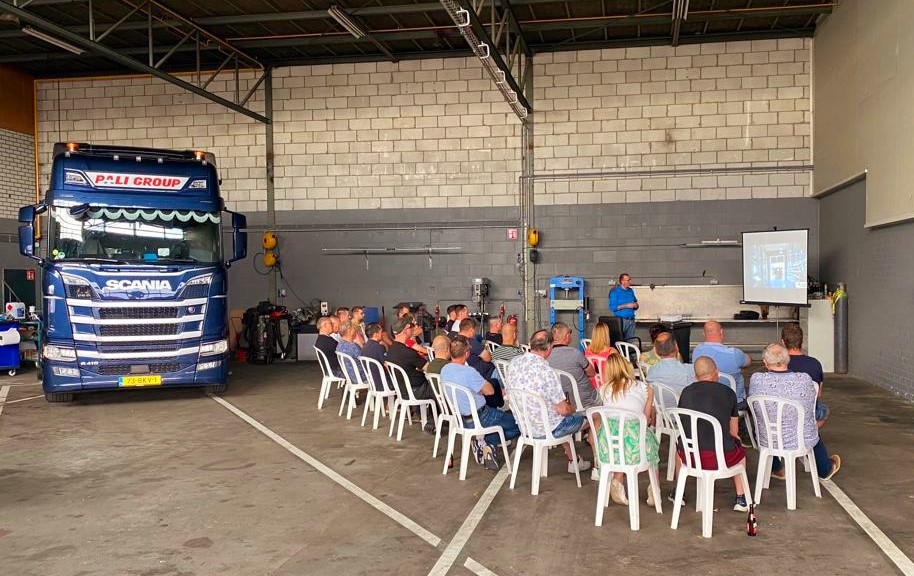 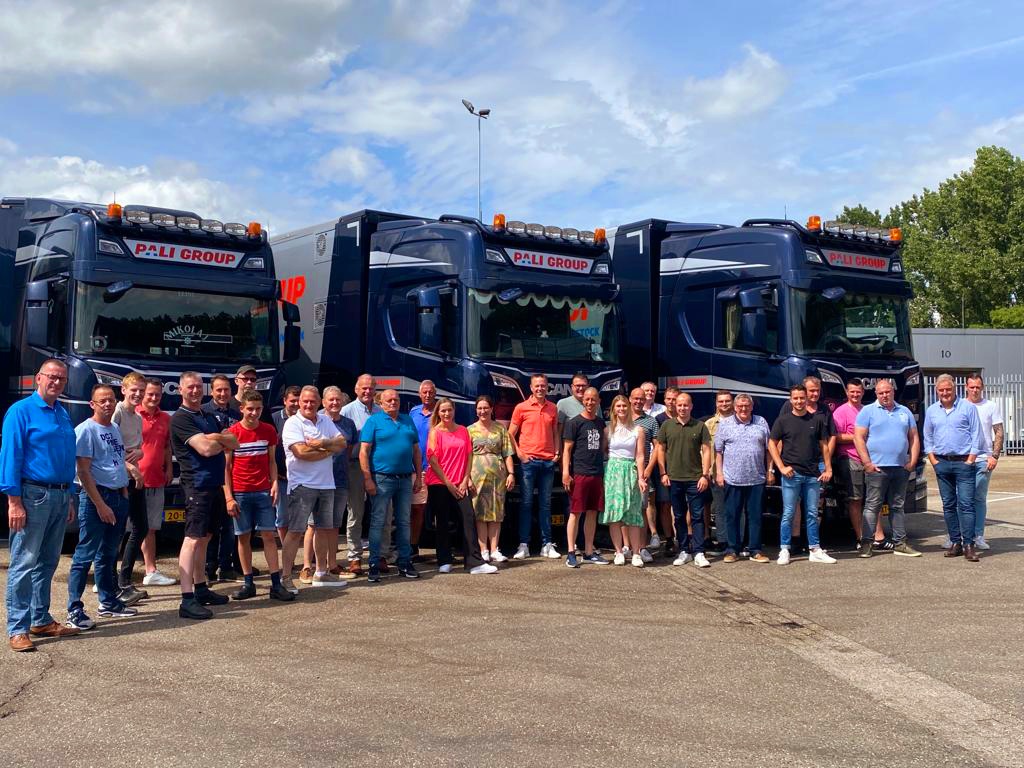 As a guest speaker, I was invited to the CRV Webinar - District 5, Eastern Netherlands-.

With the theme: "Character as a breeding goal.... can cows cope with our behavior?"

As a guest speaker, I was invited to the CRV Webinar - District 6, Central Netherlands-.

With the theme: "The behavior of the cow is not only determined by her character".

CRV Commissioner Gert-Jan Verploeg shares his experience with cows entering the milking robot for the first time, at minute/seconds 49:40.

Education and training of students, teachers and instructors at Aeres University of Applied Sciences in Dronten, The Netherlands.

This theme was central during the training days at Aeres Farms, part of Aeres hogeschool in Dronten, the Netherlands.

Given the current regulations regarding the Coronavirus, the theory took place by means of a Webinar.

Several groups have trained under my guidance for two days with cattle and cows in the cowsheds of Aeres Farms.

Starting with the calves in the Igloo up to the dairy cows in and around the milking robot. 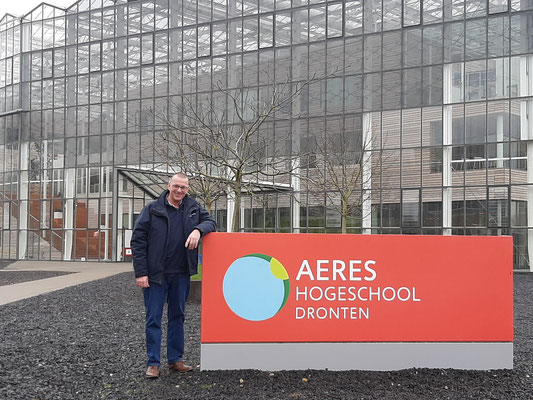 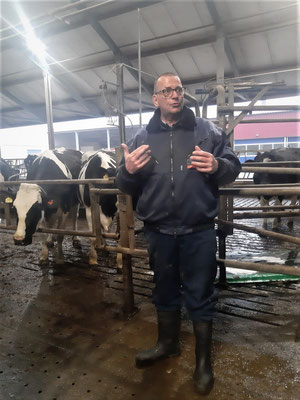 "AB Vakwerk" believes that it is important for their hoof care staff to know how and why cows react to certain situations in the barn.

If a day is not going well, one of the main causes is stress in cows. Therefore, "AB Vakwerk" organized for 30 of their employees, on a dairy farm in Spanbroek (Netherlands), a Low Stress Stockmanship training around "cows in the claw treatment box".

During an interactive PowerPoint presentation and a practical training in the barn, the participants learned many useful tips from practice.

On invitation of the "Joint Service Group for cattle veterinarians West Brabant", I was on stage at "Gasterij de Afspanning" in Heerle, (Netherlands). In the audience, 95 very interested cattle farmers and veterinarians.

Two days of Low Stress Stockmanship in Friesland, (The Netherlands).

Organized by veterinary practice "A7 Noord Vets" in Drachten/Burgum.

Four lectures and three practical demonstrations for enthusiastic veterinarians and livestock farmers, each time at a different location.

Special thanks to Mrs. Iris Kolkman of "A7 Noord Vets", for the hospitable reception and the very successful organization. 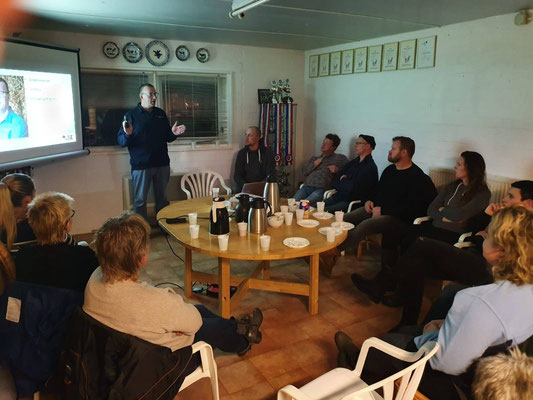 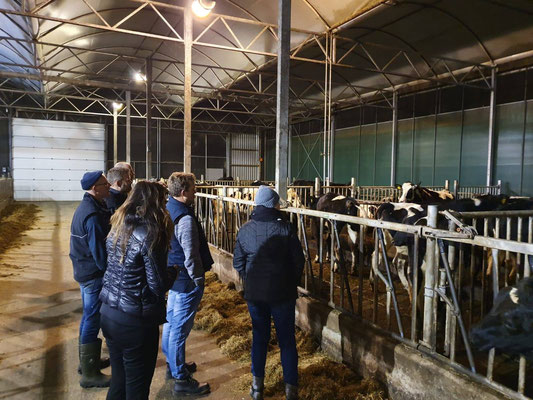 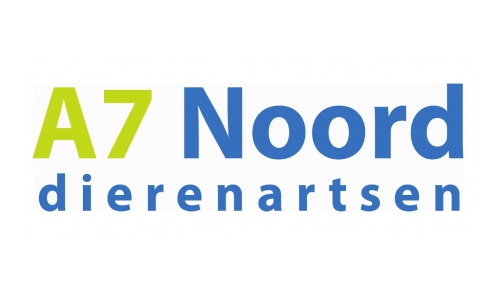 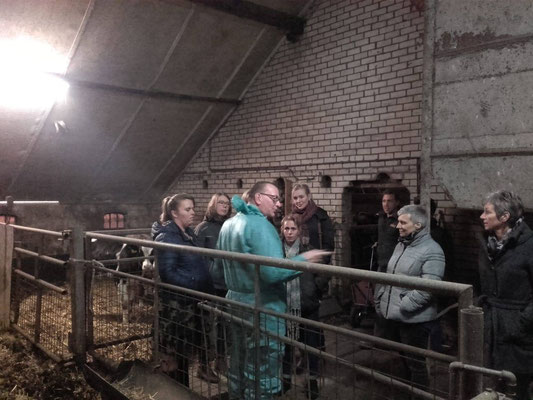 "How to handle cows in a more animal friendly, safe and efficient way".

Besides explanations about inbreeding and analysis on DNA level, the attendees also got answers to questions about cow behavior and how to deal with it. 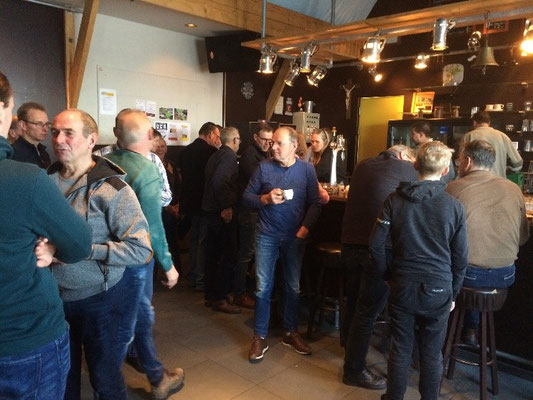 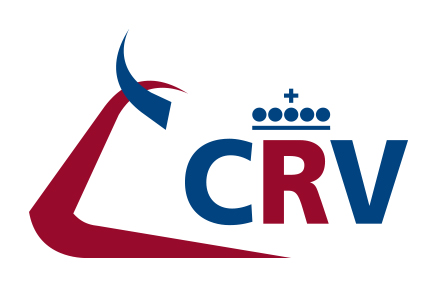 As guest speaker, I gave the presentation "A different view of cows, how to recognize, understand and respond to cattle signals". 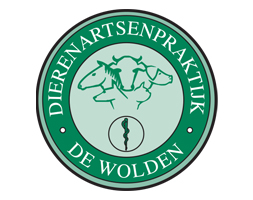 The "CRV Boerinnendag  2019" took place on November 12 in Markelo (the Netherlands), and on November 19 in Torhout (Belgium).

Both (sold-out) events were a great success with many enthusiastic female farmers.

As in 2018, this year I was the guest speaker for the main theme. This time, "How do cows experience their environment on their way to the milking parlor or milking robot?"

In addition, several workshops took place including the LSSE workshop "Calf signals from birth to weaning". 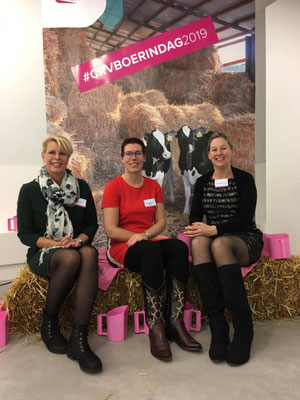 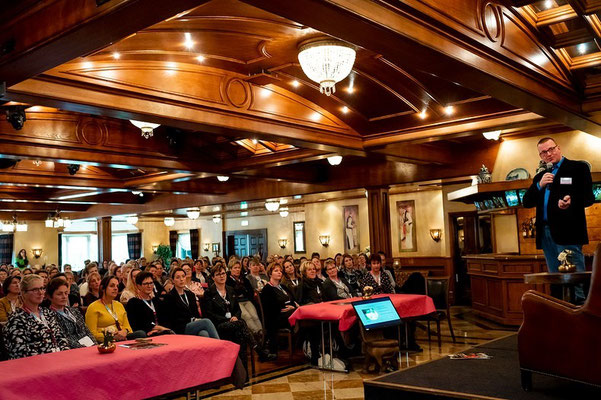 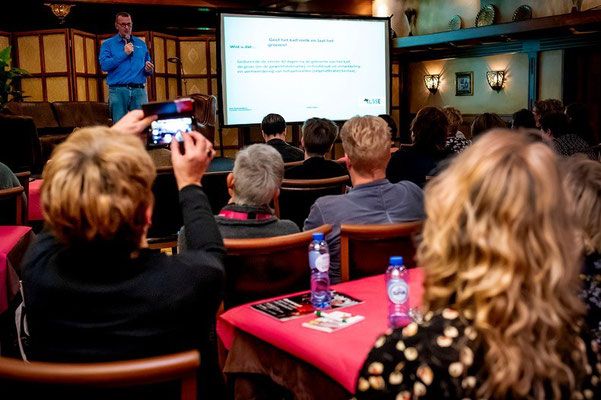 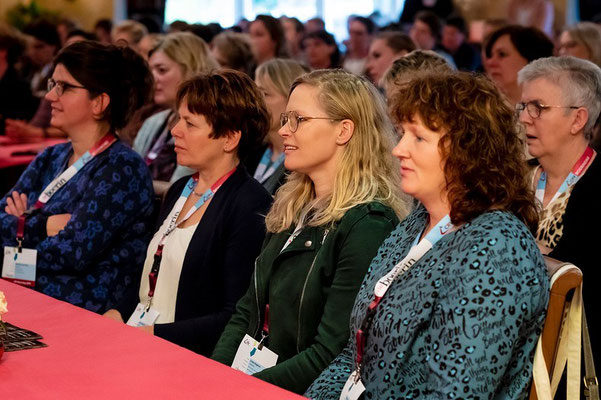 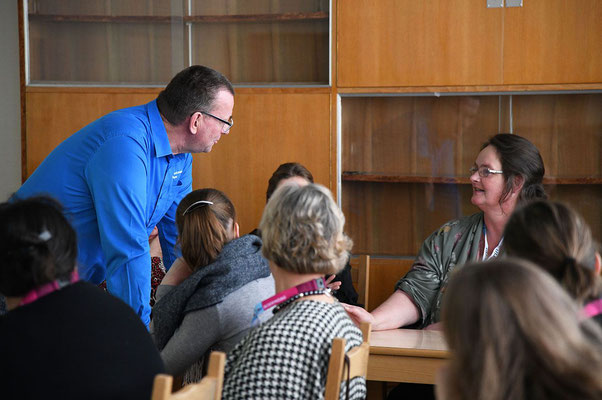 Denkavit in Voorthuizen, (The Netherlands) organizes the "Calf rearing event 2.0".

This event took place on November 7 at Denkavit's headquarters in Voorthuizen.

Four different speakers, (each from their own expertise) presented interesting lectures on calf rearing.

My lecture: "Prevent stress in calves, let them grow to their maximum potential".

You wouldn't expect it, but the Euro Buffalo company is located south of the Romanian city of Salonta.

In 1993 the company started with only 3 bison. Through targeted breeding programs, it grew into a renowned supplier of bison meat and breeding material. Both the meat and the live bison now find their way around the world.

Adult bulls reach a height of up to two meters.

Their body weight is then about 1100 Kg.

Those who think that these are slow animals are mistaken.

They reach a top speed of 65 Km. per hour and jump higher than a sport horse!

Then it is safer, more efficient and more convenient if you can handle these animals according to the Low Stress Stockmanship method.

Bison that are not kept or sold for breeding are slaughtered and processed on site in a slaughterhouse.

All business links in one hand: breeding, feeding, sale of breeding animals, meat and marketing.

A unique concept and a unique experience to work with these bison. 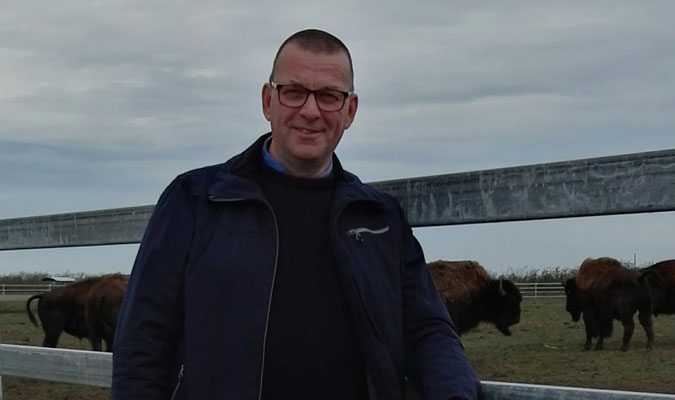 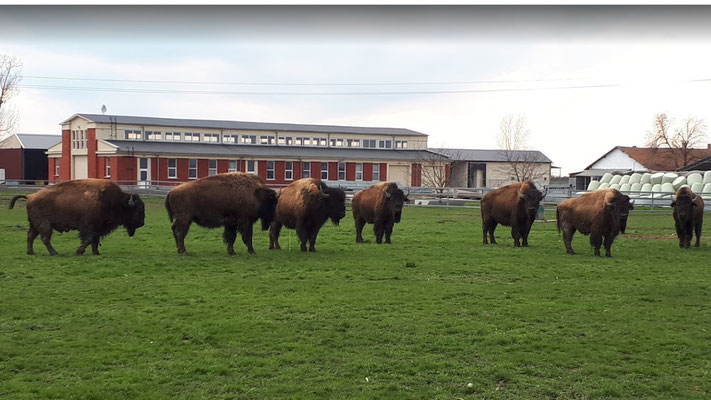 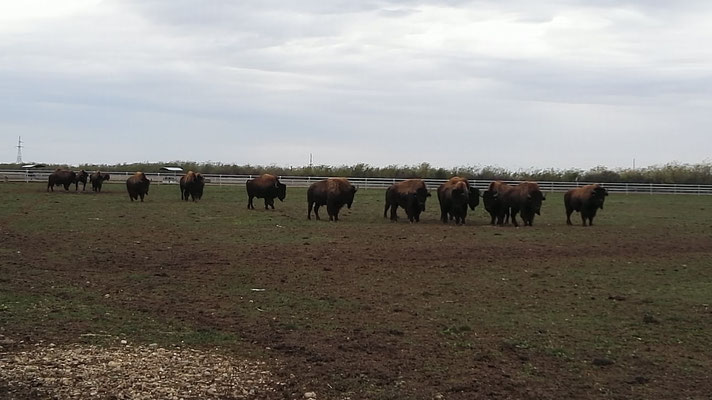 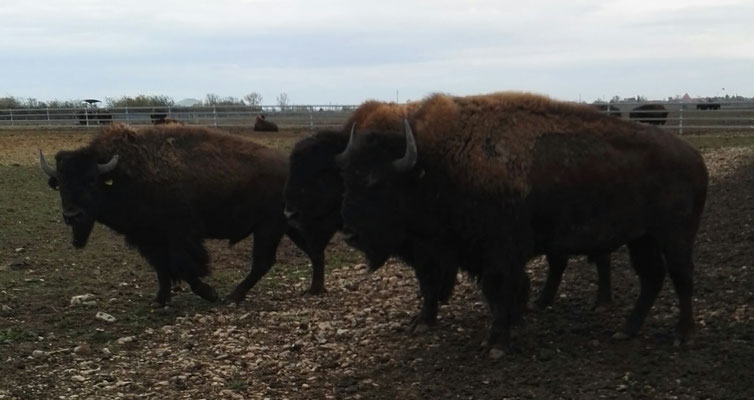 As a guest speaker, I was invited to livestock feed company Vitelia Voeders in Oirlo (Netherlands).

They organize a dairy cattle seminar for customers with the theme: "Low Stress Stockmanship and walking behavior of cows in the milking robot".  We also discussed the influences of the barn and the milking robot on the final behaviour of the cow.

The afternoon was concluded with a farm visit to dairy farm Custers-Keursten in Oirlo.

On a working visit to the Czech Republic, at Impuls Chovatelské družstvo.

"Impuls" originated from a group of Czech cattle breeders who were looking for an alternative to the Holstein cow breed.

Anno 2019 it is a professional Fleckvieh organization with its own AI station in Bobrová.

But they do even more:

Through information and education, Impuls tries to bring Czech cattle breeding to a higher level.

During my stay, I gave two seminars ("Low Stress Stockmanship in practice" and "Calf rearing from birth to weaning, how to achieve maximum growth?"), for Impuls employees and Impuls customers. Following this, I visited several large cattle farms.

Fleckvieh educational trip 2019 to the Czech Republic and Bavaria.

A group of very enthusiastic (Fleckvieh) livestock farmers went by bus to the Czech Republic and Bavaria.

The trip was organized by Bayern Genetik Nederland.

During this trip, I treated the cattle farmers to two seminars: ("Low Stress Stockmanship in the Fleckvieh barn" and "Reduction of calf mortality / reduction of mutual suckling in Fleckvieh calves").

In Bavaria, I demonstrated on several dairy farms how the Low Stress Stockmanship method works on Fleckvieh cows.

For the second consecutive year I was a guest speaker at the annual meeting of "DOC Kaas" from Hoogeveen, (Netherlands).

The theme: "Do airplanes and drones influence the behavior and functioning of cows?".

The location was the aviation museum "Aviodrome" in Lelystad.

According to annual tradition the quality milkers of "DOC Cheese" were put in the spotlight by this dairy processor.

As a guest speaker, I explained to the enthusiastic and young audience how the Low Stress Stockmanship method works, and what it benefits humans and animals.

At the request of the management of slaughterhouse Etn. Adriaens N.V. in Velzeke (Belgium), I performed an animal welfare audit.

The audit covered all processes between unloading, up to and including stunning and bleeding of the cattle to be slaughtered.

The management makes every effort to ensure that the various process steps are carried out with respect for the animal.

From this perspective, LSSE (as an independent party) was asked to carry out the audit.

The results and recommendations are described by me in the "Animal Welfare Advisory Report".

My findings were then discussed in detail with management.

On November 6, the "CRV-Boerindag 2018" took place in the Frisian town of Joure, (Netherlands).

For me, as the first male speaker in the history of the "CRV-Boerindag", a great experience.

After the main topic: "Stress-free working with calves", my workshop: "On the way to the milking parlor" followed.

This contained a lot of information and practical tips about how cows react to certain situations in the milking parlor, and how to respond to specific cow behavior.

On November 13, the second "CRV-Boerindag 2018" took place in the Dutch town of Giesenburg.

"De Regte Heijden" is one of the few dairy farms in the Netherlands where the calves are suckled with the mother and where the dairy cows wear their horns.

Eyes on Animals and LSSE working together.

In March, a meeting took place between LSSE and the Eyes on Animals team.

A group of passionate people who want to make everyone aware, in a constructive and educational way, that agricultural animals and domestic animals are not "utensils".

Animals are sentient beings that deserve to be treated with respect and dignity.

LSSE fully supports Eyes on Animals in its work.

Couldn't be there? No problem: Upon request, Arjan Swinkels will organize another "Masterclass Waterbuffalo Science".

CRV asked LSSE to give a lecture at four "CRV Winter Meetings" for beef cattle farmers on the theme:

"Breeding and inbreeding in a small population, challenge or threat?".

The audience represented the different beef cattle breeds within CRV.

The employees of AI-Service Clemens in Stadskanaal, (Netherlands) are trained by LSSE in safe, efficient, fast and animal-friendly handling of cows. Less stress during insemination not only increases job satisfaction and safety, it also has a positive influence on the fertilization result.

Thanks to Leon Clemens of AI-Service Clemens for the assignment.

Catching Galloway cattle in Scheemda, (Province of Groningen, The Netherlands).

An endless pasture and a group of Galloways that had absolutely no desire to walk in the barn.

The livestock owner tried many times to catch them, but to no avail.

Before we go into the pasture, first the theoretical explanation in the morning.

Then quietly observe how the animals react to our presence, this is absolutely necessary.

Because of the many herding, these cattle have become very shy and suspicious!

These cattle see a threat in "everything on two legs", they immediately run away.

The participants could now put the theory into practice, and they did so very well.

After about 1.5 hours, all the Galloway cattle were quietly standing in the barn.

All praise goes to the participants!